Our first year has been interesting and we have met lovely people; the most dramatic was when there was a kitten stuck up under the wheel well of our client’s Porsche and we had to phone the Fire Dept. to come access from underneath via pneumatic pillows to lift the car to rescue the kitten!

by Peter Stewart for Living France

Sarlat-la-Canéda is one of Dordogne’s most popular destinations (Credit: Jonathan Barbot)

Sarlat-la-Canéda is a Dordogne favourite, where visitors never fail to be captivated by the town’s fine medieval architecture and gastronomic delights. Here’s our insider’s guide to the main attractions, restaurants and hotels and buying property in Sarlat-la-Canéda

Sarlat-la-Canéda is unsurprisingly one of the most popular towns in Dordogne. Located just a few kilometres from the River Dordogne in south-west France, the town has retained much of its 14th-century charm and its medieval architecture is still a main pull for its thousands of yearly visitors. A popular base for exploring the Vèzére valley, you could easily spend all of your time discovering Sarlat’s quaint medieval buildings, twisting alleyways and picture-postcard squares.

What to see and do in Sarlat-la-Canéda

Originally an abbey church dating from the 11th century, the Cathédrale St-Sacerdos is a mixture of Romanesque and Gothic styles. The organ in the church is said to be one of the best preserved from the 18th century. Pop inside to hear it being played as part of a special concert or simply soak up the peace and quiet away from Sarlat’s busy squares. Nearby you can spot the a rocket-like structure called ‘lanterne des morts’, a 12th-century stone monument that is said to honour Saint Bernard, who is believed to have cured the sick by blessing their bread.

House-hunters to Sarlat should stroll along Rue des Consuls, which has a number of impressive mansion houses that are testament to Sarlat’s growth during the Middle Ages. From being a small community controlled by the church, it had, by the mid-1500s, evolved into a prosperous market town popular with wealthy merchants. Further on you’ll see elegant buildings including the 16th-century Hôtel de Mirandol with its imposing doorway; the 14th-century Hôtel Plamon with its mullion windows; and the 15th-century Hôtel de Vassal with its double turret.

You can’t go to Sarlat-la-Canéda and miss the buzzing Saturday food market in the city centre. You might have to jostle for space among the crowds of eagle-eyed locals but it’s well worth it. Trestle tables are laden with farmers’ produce: fleshy red tomatoes, brightly coloured carrots, farm-fresh plums and twisted cucumbers sit alongside seemingly bottomless boxes of garlic, truffles, and trays of foie gras.

Another market well worth a visit is the indoor market at Église Sainte-Marie. Enter through the gigantic steel doors, and you’ll see stalls piled high with everything from spicy saucisson to local St-Nectaire cheese. Don’t forget to look out for the church’s main attraction; a glass lift that rises up through bell tower to reveal breathtaking views over the rooftops of Sarlat and beyond.

Place des Oies is where you can see the life-size bronze statue of three geese that seems to appear on every postcard of Sarlat; birds that have served as a delicacy for many Salardais over the centuries. Meanwhile, on Place de la Liberté, many visitors might experience a feeling of déjà vu, as this iconic square has often served as a backdrop for films.

My article written for FRANCE ON YOUR OWN newsletter:

When thinking of the French Riviera, Nice in particular, the senses become engaged: the sight of the azure Mediterranean Sea, the sound of the waves softly lapping the shoreline, the feel of the pebbles underfoot as you walk on the beach, the smell of the salty sea mist in the air, and mostly, the taste of local specialties, such as salade niçoise and socca (a pancake made from chickpea flour and served warm with black pepper). With a Mediterranean climate and average of 300 days of sunshine, the area is indeed attractive and booming.

When thinking of the Dordogne region, Sarlat in particular, the senses become equally engaged: the sight of medieval architecture and castles, the sound of market vendors selling their wares, the feel of cobblestones underfoot as you walk through the historical center, the smell of countryside air, and mostly, the taste of local specialties such as foie gras (duck liver that originated in ancient Egypt around 2500 BC and now is emblematic of French gastronomy) and black truffles (an edible fungus that averages 500-1000€ per kg). With the variety of four distinct climatic seasons, the area is a kaleidoscope of landscape colors.

Both places are famous for their cultural activities that attract tourists from far and wide, especially the outdoor markets promoting local produce and regional specialties: Cours Saleya in Old Nice and Place de la Mairie in the historical center of Sarlat.  Tourism is vital to both: Nice has a population of approximately 340,000 and attracts an average of 5,000,000 visitors a year, while Sarlat’s population is around 10,000 with an average of 1,500,000 visitors per year.  Due to its smaller size, the town of Sarlat has a more drastic decline in visitors than the city of Nice during the winter months, not to mention overall colder temperatures, yet both host cultural events to attract tourists during the low season.

For traveling, you can’t beat the accessibility of the Nice airport and the city’s extensive bus system (except when there is a strike, bien sûr!).  By contrast, the Dordogne’s rural setting and its smaller airports significantly increases overall travel time, resulting in difficulty in getting to and from international destinations, except perhaps to the U.K.

As for ambiance, while living in Nice, I woke up to the cacophony of cars, buses, and pedestrians, inherent with city living and its hustle and bustle of activity.  Compare that setting to Sarlat, where morning birdsong and the sound of an occasional car passing by is the norm – a matter of urban vs. rural setting, each with its pros/cons & sounds:  Chacun à son gout (to each his own)!

After living nine years on the French Riviera, Kim now resides in the Dordogne.
Owner of Manoir Fontaine de l’Amour with its fully-equipped, holiday rental apartment,
she is ready to welcome you to the medieval town of Sarlat.
Visit her 24/7 in France blog  at https://twentyfourseveninfrance.com/

WAOH – it certainly has been an interesting and very busy process these past few months, m 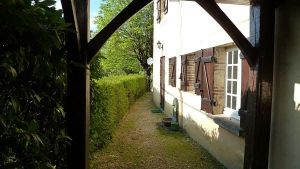 oving into our 200-year old ‘new’ character house, let alone prepping the private/independent fully-equipped apartment for the upcoming rental season.  We proudly announce that you can now book the apartment through our site OR through AirBnB !

The apartment has all the modern comforts while preserving the authentic look of wooden beams and stone walls. Of course, as with any residence, there is always work to do, as we continue to improve the landscaping and garden areas and get the Zodiac pool rea

dy for the summer months.

So, come enjoy our country-like setting (within walking distance to the historic center), and perhaps a glass of wine on the private summer kitchen or outdoor terrace after a long day of sightseeing in Sarlat and the surrounding area.

Built in the 13th century and destroyed during the 100 year war, this castle was rebuilt by Radulphe de Saint-Clar around 1450.  It was then partly restored in the 19th century by his descendant, The Marquis de Carbonnier de Marzac, ancestor of the family currently residing in a private section of the chateau.

The legend of the Dame Blanche retraces the life of Therese de Saint-Clar, who was imprisoned for 10-15 years and died in the chateau’s tower by her jealous husband, following her tryst with a Protestant lover. 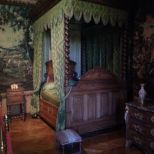 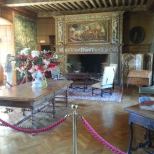 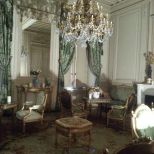 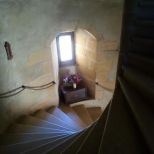 Sarlat’s population is approximately 10,000 but in summer jumps to around 100,000.  It’s late May and today, I saw two tour buses, strategically parked for attending the weekly Saturday morning market: the main street through town becomes an avenue of vendors, as well as throughout the historic center and its side streets – a true medieval maze of sights, smells, and flavors! 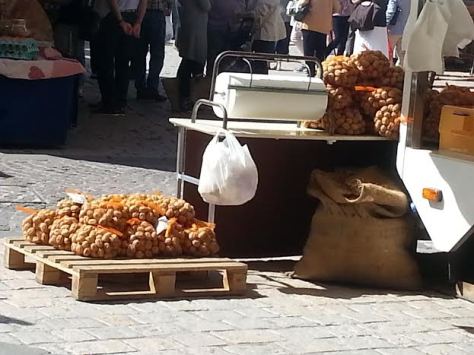 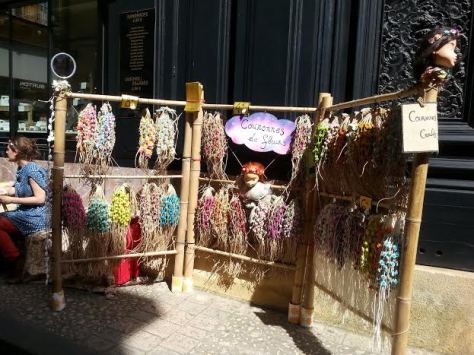 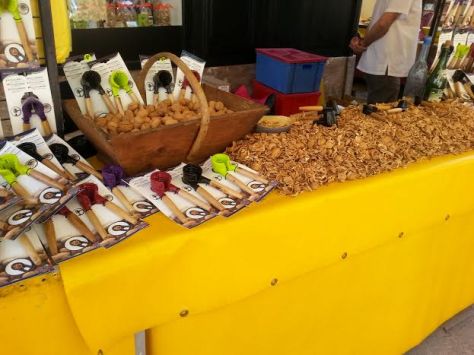 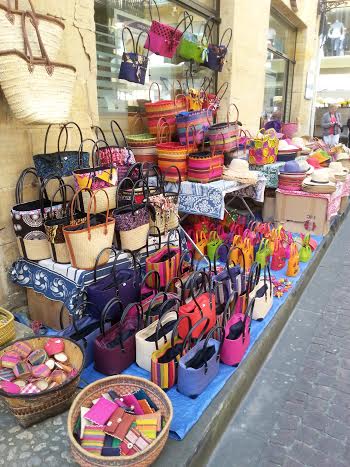 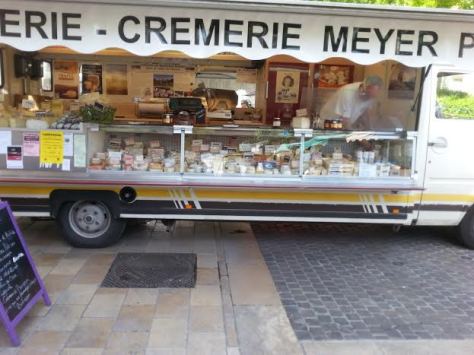 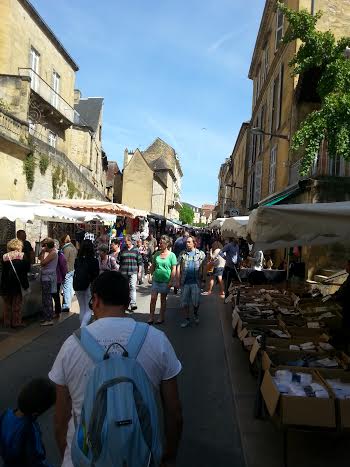 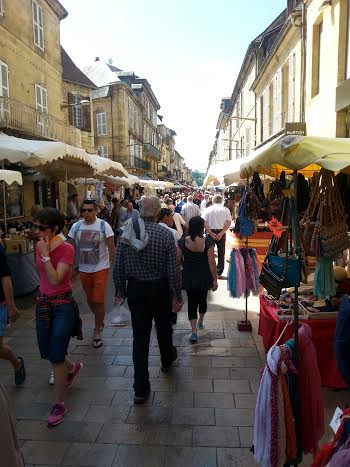 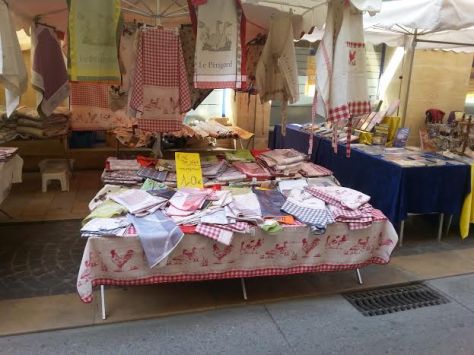 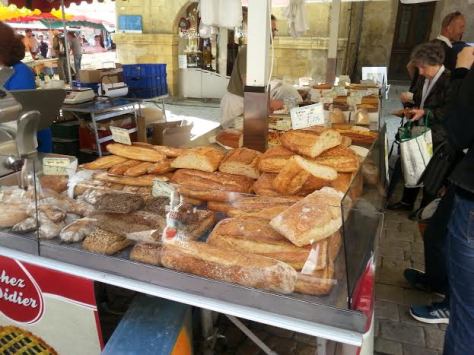 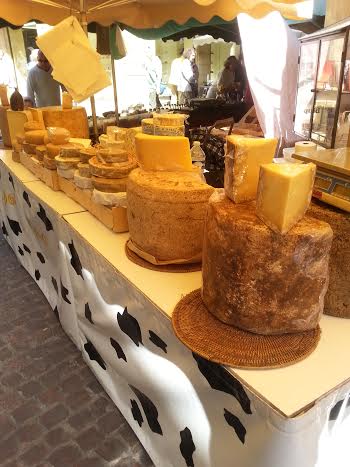 The Dordogne is France’s third largest department, and as well as numerous picturesque villages, it also boasts an incredible 4,000 chateaux, 10% of all the chateaux in France.  Like many French departments, the Dordogne is named after the river that flows through it. Foie gras, duck and goose are regional specialities.

The department has four distinct territories. In the north you will find ‘Green Périgord’ which derives its name 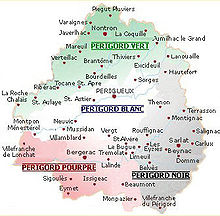 from its many green valleys and woodland, covered with trickling streams, and houses the Périgord-Limousin Regional Natural Park. The major towns in the area are Brantome (the “Venice” of the Dordogne), Nontron and Riberac.  In the center of the department is ‘White Périgord’, so called because of its limestone plateaux. It contains the capital of the Dordogne, Périgueux, with attractive shopping centre and marvellous winding old town.  The ‘Purple Périgord’, in the South West of the department, is named from the area’s grapes, which are put to good use in Bergerac, the capital of this wine producing region. The area was of great strategic significance during the hundred years war, and visitors will find a number of fortified villages, castles and chateaux built by both the English and the French here.  In the south-east you’ll find ‘Black Périgord’, with deep valleys and ancient forests. It contains the towns of Saint-Cyprien and Sarlat-la-Caneda, which are both popular with foreign buyers. It houses numerous prehistoric caves with some 30,000 year old cave paintings.

Sarlat is the capital town of the Perigold Noir – a beautiful area of deep valleys and ancient fortresses, in the South East of the Dordogne. The town is a great example of 14th century France as many of its buildings from this era remain in tact. The nearest airport is Bergerac.

The area surrounding Sarlat has history reaching back as far as ‘Primitive Man.’ Prehistoric caves with paintings for example have been found and the Vezere Valley is now classified by UNESCO as being a world heritage site.

The town center meanwhile began to makes its mark in the 9th century, eventually developing around a Benedictine abbey built in the 12th century. The wars then struck, and the town suffered greatly due to its position as a frontier region between the kings of France and England. In 1360, Sarlat became English and remained so until 1370 when the Connétable du Guesclin took over.

From the 14th to the 17th centuries, Sarlat was prosperous and displayed this through its architecture; new and grand dwellings were built as symbols of nobility, using Gothic and Renaissance styles.

Sights to see include:

Food and Drink
A typical ‘Perigordin’ meal consists of: ‘tourin blanchi’ a garlic and onion soup mixed with goose fat and eggs and topped with sorrel, foie gras, a ceps or truffle omelette, goose preserved in fat with sarladaises potatoes, a salad with nut oil, cabécou (goats cheese), walnut cake and a bowl of strawberries.