I suppose, in competing for tourists already in Nice for the annual Carnaval, the Fête du Citron in Menton is held during the same two week period. So, this year, we had our French friends from Montpellier visiting and decided to check out the competition. I knew there would be sculptures made from zillions of lemons and oranges, from seeing publicity photos – it didn’t seem that impressive and I was thinking: OK, seen one figure – seen them all. Wow, was I ever wrong!

We attended the lighted-gardens event in the evening, as this was highly recommended to me as the best one to do, : it was a fenced off park area, so you couldn’t see inside, until you entered through a curtained doorway, after which I stood frozen in awe!

The theme for this year was “Les Regions Françaises” (the Regions of France), and so, the first fruit sculpture was a huge champagne bottle with running water into a glass, lit with a variety of colored lights – it was mesmerizing! 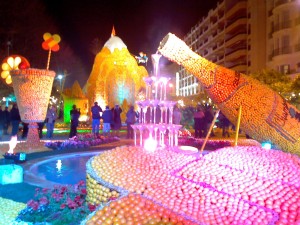 There were stilt walkers, bands, and costumed employees wandering among the crowd, and at a certain pre-announced time, as a bonus attraction, sparklers were set off from the Eiffel Tower sculpture. There was a large crowd strolling around, but the hardest part was getting a clear photo shot – even in looking at these photos, they don’t really convey how beautiful the displays were – but when I look at them, I still think, “Wow!”